Use placeholder as a Directoryvariable in scheduling reports

I’m running Business Objects 4.1 SP 6 patch 5 (14.1.6.1882). I use, almost exclusively, Crystal Reports and then schedule the reports for my users. What I’d like to know is, is it possible to use a placeholder (or some other kind of variable) as a directory when scheduling reports to the File System (I’ve attached a screen shot of where I’d like to use the variable).

My specific issue is that I schedule a lot of reports directly to the file system and the server where they are saved is being retired. I know I can go in and reschedule all the reports to point to the new server once it’s up and running but there are a lot of reports and getting that all done within the maintenance window will be quite a challenge. I was hoping I could update the reports to use a variable (or placeholder) in the Directory setting of the File System destination. That way I can reschedule all the reports now, and have the variable point to the current server and then during the maintenance window I would update the variable and all the reports would be pointed to the new server. Is something like this possible? If so, could someone point me to how it could be done. All my searches for placeholder information is yielding old versions of Business Objects (from 2012) which are no longer accurate. Thanks. 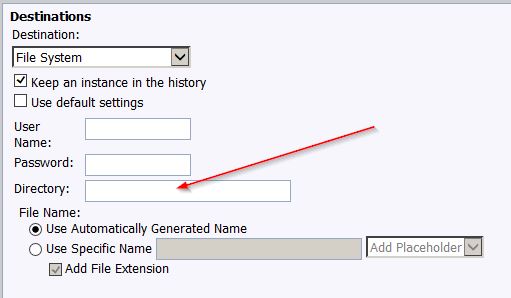 Did you find a way of achieving this ?

Thanks a lot in advance.

I never found anything within Business Objects. The best I could do was to create a DNS alias for my server, then point all my jobs to that alias. Then when the new server came online I only had to repoint my DNS alias to the new server and all the jobs didn’t have to be rescheduled.